The Barcelona and Argentina star Lionel Messi has won the FIFA Ballon d’Or trophy, ahead of Barcelona team-mates Andres Iniesta and Xavi.

Messi, 23, becomes the inaugural winner of the award (he won both separate awards, the FIFA World Player and the singular Ballon d’Or last season) after another sensational year during which he was an integral part of the Barcelona side that romped home to win La Liga last season – Messi scored 47 goals in all competitions. 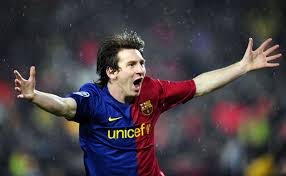 The Argentine wasn’t able to guide his national side to glory in South Africa at the World Cup however, failing to find the net as Argentina were eliminated at the quarter-final stage by Germany, when Diego Maradona’s side were ripped to pieces by a vibrant German side 4-0.

However, those failings were more to do with the side rather than with Messi himself and this season has seen the Argentine forward, for whom superlatives are simply running out, take his game to another level.

Editor Comment: Stunning ability on the field and a humbleness to match off it – upon receiving the award Messi attributed his win to the ability of his team-mates and his manager, Pep Guardiola, who handed him the award – Lionel Messi is simply the greatest player of his generation. Perhaps, even, of any generation.

Football writer & all-round pen for hire. Can tiki-taka or counter-attack at pace. Differentiates Athletic from Atletico. Follow me on twitter: http://twitter.com/AA_Richards
View all posts by AA_Richards →
This entry was posted in Europe, Personal, Spain and tagged Argentina, Barcelona, Guardiola, Iniesta, Messi, Xavi. Bookmark the permalink.