Can Tottenham Hotspur win the Premier League this season?

Harry Redknapp believes that they are outsiders and are in with a fighting chance.

Rafael van der Vaart thinks that come the season’s end they can be up there.

And new signing Steven Pienaar must certainly think the side from White Hart Lane are on an upward curve after turning down a move to Chelsea in favour of the white half of North London.

But can Tottenham Hotspur become champions of England for the first time since 1961 – a wait of 50 years, since the side of the great Bill Nicholson became the first team in England to win the double – and fight off the challenges of Arsenal, Manchester City, Chelsea and current league leaders Manchester United?

Currently Redknapp’s adventurous Spurs side lie in fifth place in the Premier League table with 37 points from 22 games. They trail Sir Alex Ferguson’s men, against whom they more than held their own with in Sunday’s 0-0 draw – perhaps some might argue that Spurs deserved to inflict upon United their first league defeat this season – by eight points, although United do have a game in hand.

So Spurs are indeed up there. But are they poised to make a tilt at the title? Can they push their own title ambitions this season? Or is it a year to soon for Redknapp and his players’ title ambitions?

Certainly after last season, when Spurs secured fourth place and Champions League football, Harry Redknapp’s side have continued to go from strength to strength.

As a team they have improved and performances such as the swashbuckling 3-1 win over Inter and the second half of the 3-2 away win against Arsenal, have proved to the players and the clubs support that they can compete with the best. 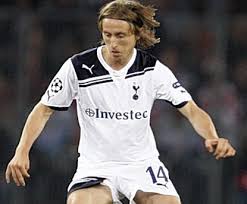 And whilst the likes of Rafa van der Vaart, Luka Modric and Gareth Bale have been proving that they are indeed world-class performers, who could grace any team in world football, their support cast have shown considerable improvement, as they look to take Spurs to the next level.

Gomes, the Brazilian goalkeeper, barely recognisable from the flap-happy, mistake-ridden stopper who pitched up from PSV for £8m in 2008, is more dominant in commanding his penalty area and remains a brilliant shot-stopper.

Benoit Assou-Ekotto and Younes Kaboul have cut the simple mistakes from their defensive game and have become more consistent, whilst Alan Hutton, the Scotland international, looks rejuvenated and is showing the quality that made Spurs shell out £9m to Rangers for his services.

Aaron Lennon has begun to add an end product to his game, whether it be a cross that creates a chance or a strike on goal himself while, until injury, Tom Huddlestone has been patrolling midfield with an intensity and air of authority that had previously been lacking in his game.

But does this combination of personal and team improvement, aligned with an added sense of belonging amongst the big-boys mean that Spurs can mount a title challenge in the second half of the season?

I just don’t see Spurs making up the required ground on United this season, despite United’s tricky run in, and become Premier League champions for two simple reasons.

Lack of consistency, and curiously, lack of goals.

For while the afroementioned Spurs players and the rest of their team-mates have improved this season once more, the side as a whole just isn’t consistent enough to win the title come May.

Look at the stats. So far this season Spurs have been beaten five times, and despite that being in-line with their title-chasing rivals (except United) – Arsenal (5) Man City (4) and Chelsea (6) – it’s too much for Spurs as they draw too many matches that they should win – Seven draws this season, five of which have come at White Hart Lane.

And this isn’t levelled out by a superior away record in the way that Arsenal’s shock home defeats have been in the current campaign – Four wins, two draws and four defeats on the road for Spurs (The Gunners record lies at 7 away wins, 3 draws and two defeats).

However, perhaps a more key reason is the biggest fallacy in the Premier League.

And that is that Spurs are the biggest attacking threat in the top-flight.

In the Champions League, their gung-ho approach has shocked teams and they’ve profited with goals galore – Personally, I feel they’ve got a good draw against AC Milan and have more chance of European success this season than Premier League glory – but in the Premier League Redknapp’s side have only found the net 31 times in their 22 games.

To put that into context, Arsenal have bagged 45, United 43, Chelsea 38 and Roberto Mancini’s supposedly defensively-minded Manchester City 37 in their respective matches, and all have conceded far less (Spurs backline has conceded 25), thus leaving them with superior goal-differences.

It’s been labelled that they are too easy to play through – maybe so – but I think that from the chances they create, Spurs don’t score enough goals, and that they are a proven goalscorer away from being genuine contenders.

Van der Vaart has certainly bagged his fairshare since his arrival, whilst Bale has chipped in from the wing. But Crouch, who has been first choice in their preferred 4-4-1-1 formation this season, has only one league goal to his name, Jermain Defoe is yet to score, out-of-favour Robbie Keane likewise, and Roman Pavlyuchenko has just five from his limited starts.

On their day, I agree with Redknapp, Spurs are capable of beating anyone. And that makes me believe that they could be FA Cup winners this season and are possible Champions League semi-finalists, depending on who they draw.

However, Redknapp’s improving side are still a Carlos Tevez – a truly fantastic centre forward who can link with the creative van der Vaart – away from being genuine title contenders.

If they can change that during the summer transfer window – much will depend on what money is available to Redknapp and what strikers are on the market – then next season, Tottenham Hotspur could make a real title-challenge.

1 Response to Can Tottenham Hotspur win the Premier League this season?