Newcastle is my biggest job says Alan Pardew, as he looks to implement a long-term strategy on Tyneside

Newcastle United boss Alan Pardew has admitted that his managerial role in the North-East is the biggest of his career, and that he is looking to stay at St James’ Park for the foreseeable future.

“It’s a bigger job than I’ve had before in terms of the time I spend working at the club,” said Pardew.

“It’s all around you, wherever you go.

“As West Ham manager, you can go into London and get lost, but here there’s no escape – I enjoy that saturation.” 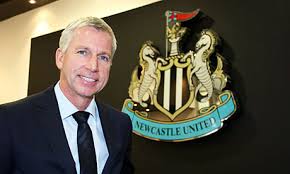 The former West Ham, Charlton, Reading and Southampton manager has been going about his business quietly, or as quietly as can be expected on Tyneside, since he somewhat suprisingly succeeded Chris Hughton in December and was handed a five-and-a-half-year contract by Newcastle chairman Mike Ashley.

And with his team currently sitting ninth in the Premier League table, some eight points clear of the relegation zone, Pardew is looking to put into place a long-term strategy at St James’ Park, providing stability to a club that has, for so long, struggled to find a place for itself.

“I’ve read up on what’s gone on in the past, looked at stuff in and around the training ground and reports of games and I’m trying to install a system for whoever comes in after me, so that he has every bit of evidence,” Pardew said.

That system includes the appointment of John Carver, a former Newcastle player and assistant at the club to Sir Bobby Robson, and two technical analysts, in an attempt to give Pardew’s side every available edge.

“Now we report on every game, the build-up, the training, little things that happen like if a player pulled out late, so there will be some sort of history here. That’s important given the size of this club.”

Next on the agenda for the Newcastle United boss are discussions with Ashley, over contracts for  two players who have been integral to the club this season – Midfielder Joey Barton, who has performed consistently well on his return to the Premier League, and Spanish left-back Jose Enrique, who is coming into the last 12 months of his current deal.

Discussions will also take place to see how Pardew would like to re-invest the £30m payment that Newcastle received up-front for Andy Carroll, the England striker who departed for Liverpool on deadline day.

Ipswich Town’s teenage striker Connor Wickham, who bagged his first professional hat-trick against Doncaster Rovers on Tuesday evening, has been mentioned as a reported target.