Premier League duo Stoke City and Birmingham City have advanced to the last eight in the FA Cup, as both recorded comfortable 3-0 wins over Brighton & Hove Albion and Sheffield Wednesday respectively. 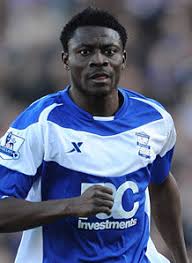 Birmingham, in front of a sparsely filled St Andrews, took an early lead against Gary Megson’s Wednesday side, through Chile international Jean Beausejour, who side-footed home after good work from Lee Bowyer.

Alex McLeish’s side stamped their authority over their League One opponents in the 17th minute, when on-loan Rubin Kazan striker Obafemi Martins (right) doubled the Blues advantage, after poor defending from Wednesday centre-back Michael Morrison.

Birmingham, without the likes of David Bentley and Nikola Zigic, increased their advantage with a third in the second-half thanks to Scotland international David Murphy, who lashed home after Wednesday had failed to clear a Keith Fahey corner.

At the Britannia Stadium, a battle of contrasting styles between Tony Pulis’ Stoke and Gus Poyet’s Brighton, saw the League One leaders unable to deal with the pace and power of Pulis’ side.

The first goal for the Potters followed a tried and trusted path, as a Rory Delap throw caused havoc in the Brighton defence, and on-loan striker John Carew forced the ball home.

Stoke made it 2-0 just six minutes later thanks to a terrific team move.

Marc Wilson, the former Portsmouth defender, played a brilliant one-two with Jermaine Pennant down the right-hand side, before swinging over a cross which Jon Walters, who bagged two in the last round against Cardiff, converted with aplomb.

And on the stroke of half-time, City booked their place in the sixth round, Ryan Shawcross heading home a Jermaine Pennant corner.