How Borussia Dortmund are taking the Bundesliga by storm

Coasting ahead in the Bundesliga, a young side playing with confidence, freedom and style.

A tight knit group of hungry players, no star names, some homegrown, some purchased for reasonable fees, none of whom cost over €5m, lead by a bright, thoughtful young Coach.

A side that the vast Westfalenstadion can once more be proud of, after several years of 1`wdisappointment, broken promises and debt.

Welcome to Borussia Dortmund and their resurgence, which may lead them to their first Bundesliga title in nine tumultuous years.

Kevin Grosskreutz, Nuri Sahin and Mario Gotze - key parts of Dortmund's ascent to the top of the Bundesliga

Re-wind back to 1997 and Borussia Dortmund, under the astute guidance of Ottmar Hitzfeld, were crowned champions of Europe, following a 3-1 victory over Italian giants Juventus – Karl-Heinz Riedle bagging two goals and 20-year-old local midfielder Lars Ricken grabbed a stunning third with his first touch in Munich

Five years later and a Dortmund side coached by Matthias Sammer were beaten finalists in the UEFA Cup, losing to Feyenoord in Rotterdam.

Nevertheless, with a side containing the likes of giant Czech Republic striker Jan Koller, young playmaker Tomas Rosicky, goalkeeper Jens Lehmann and experienced German defender Christian Worns, Sammer’s team pipped Bayer Leverkusen, a strong side including the likes of Lucio, Ze Roberto and Michael Ballack who were only beaten in the Champions League final at Hampden Park by Real Madrid thanks to Zinedine Zidane’s stunning volley and a coming-of-age performance by Iker Casillas, to the Bundesliga title.

That was nine years ago.

Since then, the club has been on one rollercoaster ride after another, producing sub-par results on the pitch, whilst almost being crippled thanks to financial mismanagement off it.

Prior to their title win and UEFA cup run in 2002, Dortmund became the only club in the Bundesliga to be traded on the stock market, when they went “public” at the turn of the millennium. 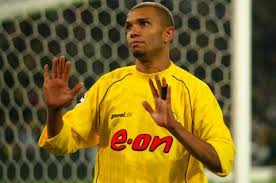 However, having spent beyond their means on foreign imports – Marcio Amoroso, the Brazilian striker who was a scorer in the 2002 final, cost the club €25m in 2001 when he arrived from Parma, having only scored eleven league goals in two seasons with the Italian club – and been poorly managed in other areas, such as budgeting for Champions League football without the guarantee of actually being in the competition, Dortmund were on the brink of financial collapse.

Indeed in 2005, the clubs share price plummeted, shedding 80% of its value on the Frankfurt Stock Exchange, dropping from €11 a share, down to just €2 a share, whilst the club posted record losses.

This meant that a complete overhaul of the club was required, including the cutting of the wage bill, the sale of key players such as Rosicky and Torsten Frings, who moved to rivals Bayern Munich, and the sale of the naming rights of the club’s stadium, the Westfalenstadion, to a local insurance company.

During this time of upheaval at the club, on-field performances gradually declined, as the sides voiciferous support – the club has the highest average attendance of any club in Europe other than Barcelona –  made their disgust at how the club was performing known.

The side consistently struggled in the Bundesliga, unable to qualify for European competition, despite the attempts of Sammer, Dutch coach Bert van Marwijk and Thomas Doll, who lead the club to an appalling 13th place finish in 2008, their worst position in 20 years.

Doll, who had been at the club only 15 months, was removed from his position as manager and replaced by the highly-rated young manager Jurgen Klopp, who had lead FSV Mainz into the Bundesliga for the first time in their history.

Klopp, at the time only 41, was hired on an initial two-year deal and said that he wanted to get the club “back on track.”

His re-mit was to make Dortmund respectable once again, without luring the club into the financial danger from which they had struggled to escape.

His focus on youth development and signing young players from elsewhere for cheap, building an attractive side of hungry, young players whose value would gradually improve.

Klopp’s impact was almost imminent, as the club won the DFB Supercup (having been beaten finalists in the German cup the previous season) in his first official match, beating reigning champions Bayern Munich 2-1, with one of the new managers first signings, playmaker Tamas Hajnal, scoring the winner.

Dortmund would finish Klopp’s first season in 6th place, having lost only five of their 34 league games and boasting the best defence in the league. 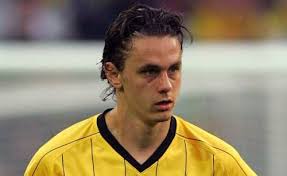 The side was built around the solid base of two young defenders, both brought in by the new manager; Neven Subotic, the towering Serbian defender signed from Klopp’s former club Mainz for a bargain €4.6m, and Mats Hummels, the talented German youngster who joined on an initial loan deal from Bayern, before signing permanently at the end of the season (Hummels would be named in the Bundesliga team of the season the next year).

The next year, and Klopp added the striker Lucas Barrios to his side for €4.2m,  and the German under-21 midfielder Sven Bender, whilst giving key responsibilities to cultured midfielder Nuri Sahin, and promoting young defender Marcel Schmelzer and  winger Kevin Grosskreutz to the first-team squad, as he looked for his side to be more vibrant and creative.

Barrios would go on to score 19 goals in his debut season, playing as the focal point in the managers preferred 4-2-3-1 formation, as the tigerish side that Klopp was putting together finished in fifth place, finishing some 13 points behind champions Bayern, yet earning themselves a spot in the Europa League.

The on-field improvement that Klopp’s side was making, allied with the support that he was receiving from the Dortmund supporters, ensured that the Dortmund board gave him a new deal until 2014.

Prior to the beginning of the current campaign Klopp made few changes to his squad, happy with the side that he had been building in the two previous seasons. The squad remained one of the youngest in the Bundesliga, with an average age of just 24, and the coach had full belief in the players already at his disposal.

Therefore, he only made three key additions to his squad. Firstly, the signing of Lech Poznan striker Robert Lewandowski, a Polish international as back-up to Barrios.

The €350,000 purchase of 21-year-old Japanese playmaker Shinji Kagawa, who few outside of his homeland would have heard of.

And perhaps most importantly, the permanent promotion from the clubs youth side of Mario Gotze, an 18-year-old attacking midfielder who had made his debut the previous season and has been hailed as  “one of the best talents that we’ve ever had” according to the German football associations Technical Director, former Dortmund boss Matthias Sammer.

Klopp was keen for his side to make a good start to the season, believing that his young players had all the technical attributes to make a challenge for the Champions League places on offer in the Bundesliga to the top three sides, but needed the added belief that results would bring.

Not that he would have you share his belief that his side could make the top three.

“Bayern will be the champions and they will be pushed the most by the likes of Schalke, Bremen and Wolfsburg, not to forget Stuttgart and Leverkusen. We want to be just behind the top teams, where we finished last season, around fifth spot,” he told Kicker on the eve of the season, firmly playing down his sides chances in public.

However, since those comments, Dortmund’s enthusiastic side, packed full of pace and ingenuity have been outstanding, exceeding even Klopp’s own personal expectations, and have opened themselves up a 10 point lead atop the Bundesliga table with 11 games remaining.

But just how have they managed to be so dominant?

Firstly, it must be taken into acccount the injuries that have robbed Dortmund of three of their most experienced players for much of this season. 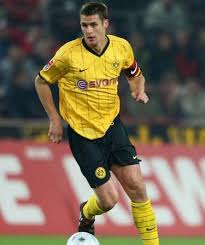 Club-captain Sebastian Kehl has made only three appearances in the Bundesliga, Tamas Hajnal missed the first half of the campaign through injury, and when he did return to fitness, found his path to the first team blocked so had since left on-loan to rediscover his form at Stuttgart and Mohamed Zidan, the mercurial Egyptian forward, has only made two appearances this term after sustaining a serious knee injury towards the back end of last season.

Yet, in spite of those absences the clubs group of talented, energetic young players have come together, embraced the 4-2-3-1 formation that Klopp integrated into the side upon his 2008 arrival, and attacked opponents at relentless speed.

When Dortmund are in possession of the football, their aim is to shift the ball seamlessly from defence into attack, with short sharp passing at pace.

They play at a high tempo for the entire 90 minutes, aiming to use their speed, stamina and vitality to overrun their opponents, whilst assimilating that ability with the fearless of youth.

The fulcrum of the side remains the Turkish international midfielder Sahin, whose left foot dictates play in the manner that Bastian Schweinsteiger does for Bayern. Whilst Sahin probes, the irrepressible free-flowing attacking midfielders – Grosskreutz, Gotze, Kagawa and ‘Kuba’ Blaszczykowski – buzz around the field, trying to create two against one situations with opposing defenders.

“They play an elegant, passionate and imaginative football” said Bayer Leverkusen coach Jupp Heynckes, after Dortmund had recently torn his side apart 3-1 at the BayArena.

And it’s been that way since the beginning of the season.

An opening day defeat against Leverkusen at the Westfalenstadion showed people that Klopp’s side were vulnerable. They conceded two quick-fire goals in the first half and then couldn’t break down a resolute backline marshalled brilliantly by Sami Hyypia.

However, they then remained unbeaten until the final match before the winter break, a fifteen match run that encompassed 14 thrilling victories – including a stunning 4-0 away win against surprise package Hannover –  and one draw – when a 93rd minute free-kick from the unheralded Antonio Da Silva, largely seen as back-up to Sahin, earned a point at Hoffenheim.

Goals flew in from all angles as the youthful exuberrance of the Dormund side grew with each passing game, whilst a backline marshalled by the towering figures of Hummels and Subotic conceded a meagre 10 goals. 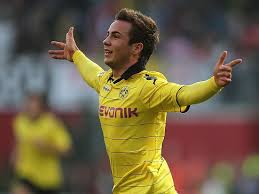 The prodigious talent that is Mario Gotze made a starting berth his own, whilst also making his full international debut, and Shinji Kagawa’s reputation has soared, seeing him linked with €15m moves to the likes of European powerhouses Arsenal and Barcelona.

In the six games since the winter break, Klopp’s side have won three and drawn three, the pick of the bunch being the 3-1 away win against Leverkusen, when two goals from Grosskreutz and one from the sublime Gotze in the space of six minutes destroyed their closest challengers, as they look to fire their way to the Bundesliga title.

They meet Bayern Munich on Saturday, with FC Hollywood fresh from their win in the Champions League against Inter, with 28-goal Mario Gomez bang in form.

This will be the biggest obstacle faced by the vibrant Dortmund to date, in a hostile Allianz Arena. But who wouldn’t back them to pass their latest test?

For Klopp, since his appointment in 2008, has achieved much more than was expected of him and has certainly done more than get Borussia Dortmund “back on track.”

Are Borussia Dortmund set for the Bundesliga crown?