Whilst England boss Roy Hodgson has come under scrutiny over his 23-man squad for Euro 2012 from just about everyone in the world of football, as well as those capable of summing up their feelings in 140 characters on Twitter, perhaps we should spare a thought for other international managers who have had to make difficult choices concerning their squads for the upcoming European Championships.

As Hodgson has had to decide whether to plump for a £20m winger with no goals or assists this season, an 18-year-old with only six Premier League starts, and a £35m striker with four league goals this season (instead of Peter Crouch and his 22 in 42 international record), some of his contemporaries have already made, and are preparing to make, some of the biggest decisions of their managerial careers.

Here’s a look at three of the questions currently on the mind of Hodgson’s peers:

Head back six months and the question of whether Dortmund’s wonderkid Mario Gotze – widely hailed in his homeland, most notably by the German FA’s technical director Matthias Sammer who has called him “one of the best talents that we’ve ever had” – would be a part of Joachim Loew’s squad would be met with much nodding and definitive exclaimations of the 19-year-old’s attacking midfielder’s brilliance. Fast-forward to the present day, and following four months out with a hip injury, from which he only returned to first-team action on April 22nd and expectations for him to have a stellar impact in Poland/Ukraine have somewhat died down. How much trust Loew will have in the uber-talented youngster will be shown in this summer’s Group of Death. 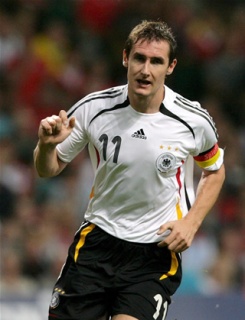 Two players guaranteed their spots in Loew’s squad are the Bayern Munich goal-machine Mario Gomez, on the back of a 40+ goals season, and the experienced frontman Miroslav Klose, with 63 international goals to his name and nine goals in Euro 2012 qualifying, despite making only six appearances. However, there isn’t space for both in the starting XI, with Loew’s favoured 4-2-3-1 formation meaning that one will be left on the substitutes bench. Klose has been the main striker for 10-years now, with 16 of his international goals coming at major international tournaments but Gomez, following another goal-laden season in the Bavarian capital, will unquestionably believe that now is the time for his ascension to Germany’s starting number 9.

Whilst Roy Hodgson has scratched around desperately for strikers who aren’t Wayne Rooney, he will have certainly shot jealous glances at Bert van Marwijk, the Dutch boss who has already had to tell Eredivisie top-scorer Bas Dost (32 in 34) that he wouldn’t be one of his three front-men this summer. Highly-rated FC Twente forward Luuk De Jong will head to Poland/Ukraine as third choice and van Marwijk’s preferred 4-2-3-1 formation means that whilst Arsenal’s Robin van Persie and Schalke’s Klaas Jan Huntelaar have both had record-breaking season’s, one of them will be sitting on the bench when the Dutch kick off their tournament against Denmark in Kharkiv on June 9, van Marwijk having proclaimed earlier this month: “I’m not sure if [Huntelaar and Van Persie] will play together at the Euros.” Certainly, the 2-1 friendly defeat by Bulgaria, with both players starting – van Persie having been pushed to the right of the attacking midfield trio – ought to have been enough to dissuade van Marwijk from starting the tournament with such a strategy.

Arsenal top scorer van Persie has been in blistering form for the Gunners, notching 30 goals in the Premier League this season, as well as being named the PFA Footballer of the Year, putting him in pole position but his recent record for his country isn’t nearly as impressive scoring in just one of their last nine internationals – and that against San Marino, when he scored four.

On the other hand, ‘The Hunter’, struck 48 times in just 47 games for the Bundesliga side this season, has six goals in his last eight appearances for the Oranje, and his overall international record, despite having never made a starting spot his own, currently stands at 31 goals in 50 apps. Whichever decision van Marwijk makes, for many, he can’t be wrong. For others, he can’t be right.

Antonio Cassano will be Cesare Prandelli’s main striker – But who will he partner?

When Antonio Cassano underwent surgery for a minor heart defect in November, it was believed that he wouldn’t return to competitive action until August at the earliest. However, the former enfant terrible of Italian football has made a quite staggering recovery, returning to play a part in AC Milan’s ultimately unsuccessful title challenge, and adding a major boost to Italy boss Prandelli in the process. Cassano scored six times in qualifying and his return is a big boost to what is an inexperienced Italian frontline in the squad (containing Roma’s former Swansea-loanee Fabio Borini.) Who will partner the Rossoneri forward is the main question, and the choice has been whittled down to two – Manchester City striker Mario Balotelli or Udinese poacher Antonio Di Natale.

Di Natale hadn’t been selected since the 2010 World Cup, but with 80 Serie A goals in the last three seasons, including two capocannoniere titles, the 34-year-old brings a huge amount of experience to the squad, and no shortage of quality.

His main rival for a starting spot is the mercurial talent that is Balotelli. With 17 goals in 32 appearances for the Premier League champions this season, and his physical presence, Balotelli is perhaps Prandelli’s main choice alongside the diminutive Cassano. However, the often-frustrating forward, who has been sent off four times in the past two seasons, could equally prove a divisive force and whilst he may bring huge reward, Prandelli must decide whether that outweighs the risk for the Azzurri.